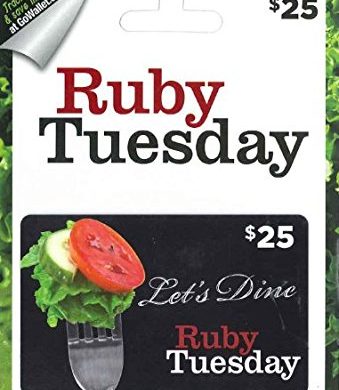 Ruby Tuesday has been a go to restaurant for me over the past decade.  Before then Ruby Tuesday did not have locations near me so I never had the chance to eat there.  A Ruby Tuesday was built near my neighborhood years ago and after working all day and evenings at my home office I would drive up there and enjoy several of their great entrees.  Like any local restaurant there were a group of locals that came in every week and with this being my main source of meals for several years I was fortunate to make several new companions.  Several different walks of life in the gentlemen that I met and thanks to Ruby Tuesday for providing me the chance to meet men of different walks and levels of belief.

Recently, after getting married and moving, there is a new Ruby Tuesday that my family and I dine at.  Not nearly as often, but on occasions we take a drive out to Ruby Tuesday’s and enjoy their great food.  Today after our church service and taking a short Sunday afternoon drive we decided to go there and see what the new Ruby Tuesday Garden Bar was all about.

At first my wife was disappointed as some of her “salads”, like broccoli salad were no longer available.  However, she soon realized that there were many new toppings and salad dressings.  The new Ruby Tuesday Garden Bar has more than doubled their variety and selection from 34 items to more than 70 fresh ingredients.  Featuring more than a dozen new fruits and vegetables, premium cheeses and ten dressings made in house.  Even my daughter ate her salad of which she choose the kale, spinach blend, ham, cheese, cucumbers, broccoli and tomatoes.

If you have a Ruby Tuesday near you definitely take a night out and check out their new Garden Bar.  They have even added several new items to their entree menu.  The one that really caught my eye was their new Hickory-Bourbon glazed pork chop.  Now that is truly a gift for father!

Pick up a $25 Ruby Tuesday Gift Card here and take your wife and family out to your nearest Ruby Tuesday.  Their relaxing environment is perfect for your night out and the variety of different foods are sure to bring a smile to your wife and children!  Or give it to your father as a gift for father who can then take out the family!

You can get your $25 Ruby Tuesday Gift Card here!