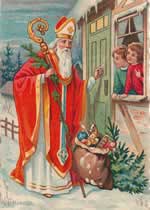 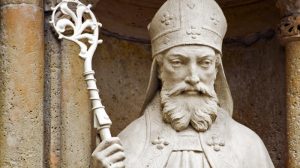 In Asia Minor, on the southern coast of what we know today as Turkey, during the third century in the village of Patara, lived a boy named Nicholas.  He was a devout Christian following his family’s values as they lived out Christianity.  While Nicholas was still young his mother and father died in an epidemic.  Nicholas inherited their fortune and was called to do what his earlier teachings of Jesus suggested.  Assist the suffering, the poor and the sick by selling what you own and give money to the poor and needy.  Nicholas did just that and lived out his life by that motto.

Nicholas grew up to become Bishop of Myra while still a young man and truly dedicated his life to serving God.  He was known throughout the land for his generosity for his love for children and his concern for sailors and ships.  One of the earlier stories of Nicholas thinking about and loving his neighbors was the story of a poor man who had three daughters.  Back then the father of a young woman had to offer a husband prospect something of value.  Whether it be money or property, either or had to be brought by a woman to marriage as a payment.  Without this a woman was unlikely to marry.  This poor man’s three daughters were destined to be sold into slavery without this payment.  Ironically, on three different occasions, bags of gold were tossed through an open window landing in stockings or shoes.  This was an answer to the old man’s prayers to God granting him a miracle.  The father was determined to discover who was helping his family so by staying up all night and when the final sack was mysteriously delivered the father rand down the road.  To his surprise he apprehended the generous man and immediately recognized the young bishop.  Nicholas deflected the praise and told the father, “No, all thanks go to God, not me”.

Nicholas the bishop, believed literally that Christ’s injunction that when we give, we should do so in secret, sacrificially in Christ’s name and not our own!  The father promised that he would tell no one of the Bishop’s generosity.  It wasn’t until after Nicholas’ death that the world learned of the numerous stories of his life of humbleness and giving.  This was the life he was called to live, this was the life he stayed true too. Bishop Nicholas of the early Church, is Saint Nicholas. Saint Nicholas helped restore the hope of families and communities as we as believers in the trinity are called to do.

Saint Nicholas was also known as a protector of children and one of the oldest stories takes place long after his death.  The townspeople of Myra were celebrating on the eve of his Saint Nicholas day when a group of Arab pirates from Crete came into their district.  The stole treasures from the Church of Saint Nicholas and took it away as booty.  While they were leaving town, they grabbed a young boy named Basilios and had plans to make him into a slave child.  The Emir, or ruler, chose Basilios to be his personal cupbearer.  Over the next year Basilios would wait on the King bringing his wine to him in a beautiful golden cup.  Basilios’ parents were devastated at their loss of their only child during this time.

As the next Saint Nicholas feast day neared, Basilios’ mother would not join the festivities due to her grief as this time was a time of tragedy, not celebration.  Instead, she held a simple observance at home with quiet prayers for the safety of Basilios.  During this time of Basilios’ mother’s prayers, Basilios was suddenly whirled up and away from serving the Emir.  Saint Nicholas appeared to Basilios as he was terrified and blessed him and set him down at his home back in Myra.  Basilios had amazingly been given back to his parents still holding the king’s golden cup.  This is the first story told of Saint Nicholas protecting children which ultimately became his primary role in the west.

Several stories have been told of Saint Nicholas and the sea.  Nicholas as a young boy sought the holy by making the pilgrimage to the Holy land. He wanted to walk where Jesus walked seeking to know more deeply about Jesus and experience the life of Jesus as he lived. His life, his passions and his resurrection.  As Saint Nicholas was returning by the sea, a strong storm came up almost wrecking their vessel.  Nicholas calmly prayed as he imaged Christ would do.  Soon, to everyone’s amazement the winds and waves suddenly calmed, sparing the lives of them all.  Saint Nicholas was truly the patron of sailors and voyagers.

In the early USA his name was ‘Kris Kringle’ (from the Christkind).  Later, Dutch settlers in the USA took the old stories of St. Nicholas with them and Kris Kringle and St Nicholas became ‘Sinterklaas’ or as we now say ‘Santa Claus’!  Through the centuries St. Nicholas has continued to be venerated by Roman Catholics and Orthodox Christians — and he is honored by Protestant Christians.  By his example of generosity to those in need, St. Nicholas is a model of Christ’s call to selfless giving.